Bitcoin could rise back to $10,350 before the week ends

Bitcoin, the original cryptocurrency, has stolen the spotlight with its incredibly bullish movements this year. Touting its 42% year-to-date rise, BTC has a market value of $9800 at the time of writing. CoinMarketCap showed Bitcoin has a market capitalization of over $177.45 billion, with over $45.24 billion worth of BTC traded in the last 24 hours. 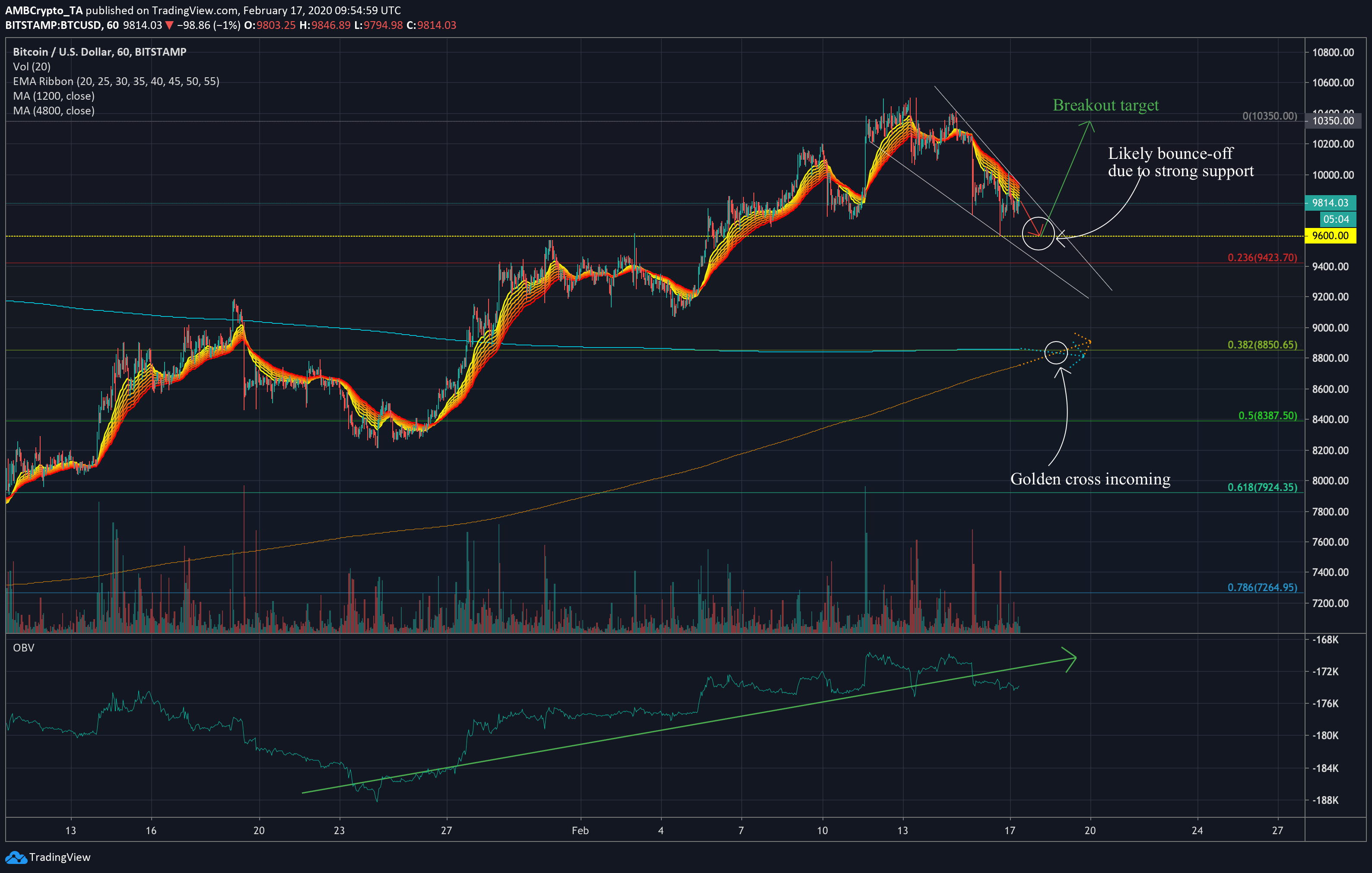 Following Bitcoin’s impressive growth from under $7000 at the start of the year, to just below $10,500 in the second week of February, BTC started moving through a falling wedge formation on the 1-hour chart. These patterns breakout upward 68% of the time, which is a positive note to investors concerned after Bitcoin’s recent dip back under $10,000.

However, the EMA ribbon lines, a cascade of exponential moving averages, were seen moving above the price candles, which typically signals downward price movement in the short-term. This could lead to BTC finding its way down to the $9600 level in the next couple of days.

However, the $9600 level has historically provided strong support to the original cryptocurrency, and with the 50 and 200-day moving averages converging into a golden cross soon, a bounce-off seems likely. Considering the on-balance volume (OBV) indicator presented rising accumulation of BTC since late-January, it’s unlikely Bitcoin will drop under the support level in the near future.

A bounce-off from this key resistance could facilitate an upward breakout from the pattern to the 0% Fibonacci retracement line before the weekend.

The MVRV ratio (market value to realized value ratio) compares BTC‘s market capitalization to the aggregate value of all Bitcoin at the time they were last moved. For most crypto-assets, an MVRV ratio above 1.0 is considered bearish and overvalued, however, most consider this threshold to be higher for Bitcoin — 3.7.

According to data from CoinMetrics, Bitcoin’s MVRV ratio has been steadily rising since the start of the year, which likely signifies a rising bullish trend on an undervalued asset. This could imply significant price appreciation in the months to come.

Considering the position of the EMA ribbons, Bitcoin is likely to experience some downward price action, placing the cryptocurrency at the $9600 level in the next couple of days. With strong support at this level, BTC could pump back above $10,000, fueled by the incoming golden cross to possibly $10,350 by the end of the week.