Bitcoin may be suffering from post-Valentine’s Day blues in the retail market, but with institutions love is still in the air.

Last week, the premier cryptocurrency broke into its 2020 high, recording over $10,300 in a bullish run-up to February 14, but soon, after it dropped. In the past few days, Bitcoin has lost over 7.5 percent of its value, trading at a press time price of under $9,650.

Despite the price drop, institutions haven’t let go yet. Open Interest for Bitcoin Future contracts on the regulated CME [Chicago Mercantile Exchange] has moved to their highest levels in the past 7 months, reaching $338 million.

According to data from skew markets, on February 14, the last trading day for the Windy City exchange offering both BTC Futures and Options saw open positions not seen since 10 July 2019. Back then the spot price for Bitcoin was $12,500, almost a third higher than its price at press time. 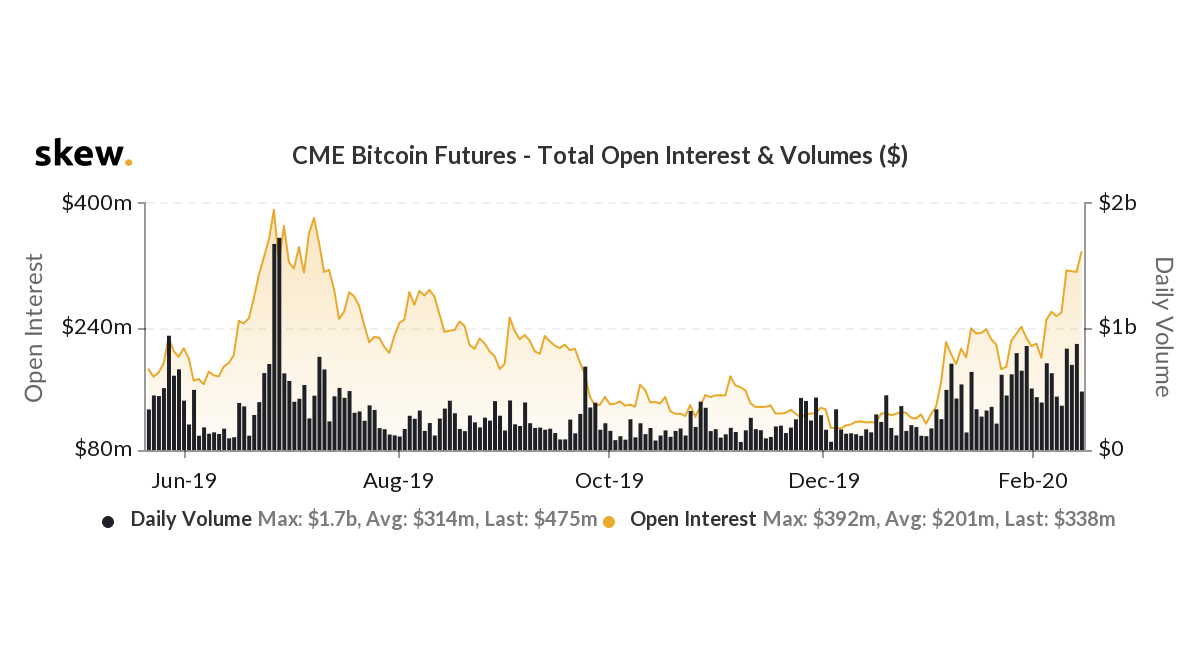 What’s even more interesting is the surrounding price-trend seen during those periods. In July the price was teetering off slowly but surely since reaching its 2019 high of $13,800 a few weeks earlier. As the Libra induced bulls began to recede, and regulators began to impede, Bitcoin dropped to $9,800 by the close of the month.

During this time, institutions followed the price. In the same time frame, institutional interest measured again in OI dropped by over 40 percent. This indicated investors were closing out open positions signaling a bearish retreat on both spot and future fronts.

The market, in February 2020, does not point to the same. Even as the price dropped by over 6.5 percent in the past few days, the OI is only rising. Since February 10, the OI on CME has increased by 37 percent. In the past week alone, CME traded an average of 12,645 BTC Futures contracts i.e. an equivalent of 63,226 Bitcoins per day. Not a small number indeed.

Not just in the here and now, but institutions are bullish even in the long-term. According to the latest Arcane Research report, with regard to the contracts expiring in March 2020, the premium rates are as high as 2.51 percent, non-regulated exchanges are as high as 3.38 percent.

Post the BTC halving scheduled for May 2020, bulls run wild. The contracts expiring in June 2020 are trading at a premium of 4.84 percent. This despite the coin falling off its $10, 000 perch.