Bitcoin has briefly fallen below $36,000 creating a massive liquidation of long orders in different cryptocurrency exchanges. According to data shared by CoinGlass, in the last 24 hours alone, 111,623 traders were liquidated for a total of $426.60 million. This shows that there was a large number of traders bullish about Bitcoin and the whole cryptocurrency market that should now re-think their positions in the market.

Bitcoin has fallen below $36,000 for just a few minutes between April 4th and 5th. This shows that there is a clear bearish sentiment in the market despite the long positions that have been closed in recent hours as shown above.

Bitcoin (BTC) and the whole cryptocurrency market have been in a bear trend since November 2021 when BTC reached all-time highs close to $69,000. If Bitcoin continues falling, we might see the virtual currency reaching $30,000 in the near future, which would play a very important role in sustaining Bitcoin price in the coming months.

$30,000 is a very important support level for Bitcoin that worked in the past (especially in 2021). Therefore, it would be key to see what could happen with Bitcoin close to these levels. Furthermore, it is worth pointing out that Bitcoin is also following traditional financial markets.

Due to the ongoing war started by Russia in Ukraine, we see that markets are currently experiencing volatility, which is also affecting Bitcoin and other virtual currencies. According to data shared by CoinGecko, Bitcoin lost 8.6% of its value in the last 7 days alone.

Other virtual currencies such as Solana (SOL) have also fallen by more than 15.4% during the same period of time. LUNA, for example, registered a 9.6% fall as well. Therefore, the whole crypto market has been affected by the recent sell-off in financial markets. 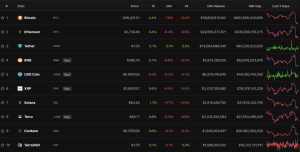 Furthermore, higher interest rates are also affecting capital flows coming to Bitcoin and other digital currencies. Investors are analysing whether it is better to move towards safer investments rather than assets that are still considered “high risk” such as virtual currencies.

It would be important to analyse how traders analyse the following moves in the market and whether they would open new long or short positions. If Bitcoin falls below $30,000, then we could see the market moving even lower and reaching the lowest point since the start of the bull market in early 2021.

Bancor V3 Set To Launch May 11