An Ethereum-based cryptocurrency has gained around 10,000% in just a few hours as a large number of traders decided to buy in bulk this digital asset. The digital currency is called Opyn yCurve Insurance (OCRV) and it apparently would help users to get insurance on their deposits.

Cryptocurrency manipulation, specifically of Altcoins, seems to have returned to be a common and daily thing. When the bull market of 2017 started, a large number of Initial Coin Offerings (ICOs) registered massive price increases pushed by users that were following pump and dump groups.

Now, the Opyn yCurve Insurance cryptocurrency experienced a massive price surge from $0.018 to $2.84 in just a few days. This represents an increase of 15,656% in a very short period of time. However, the price was not able to be sustained for a long period of time and it fell to $0.24 as fast as it went up.

This shows that it was a typical pump and dump scheme that is not related to any fundamental or technical factor. This was simply manipulation by a group of users that decided to move the market, make some bucks and run with their funds. 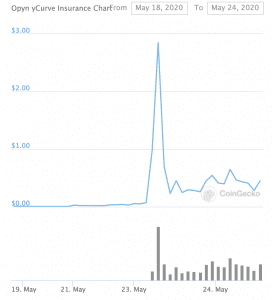 According to Daryl Lau, an analyst at CoinGecko, the virtual currency was promoted in the 4chan website as a “gem” in the cryptocurrency market that was just “going to explode.” Moreover, the user that wrote the post stated that the digital currency was “already shilled on Telegram.”

Cryptocurrency debates and pump and dump schemes have been a normal thing in 2017 and have been expanding in this way in the last years. However, the bear market and the 2018 delusional year reduced the number of sudden spikes in small-cap altcoins.

This is not the first time that 4Chan is involved in the manipulation of digital assets. Ad Mr. Lau commented in the past, the digital currency ocDAI surged by 500% because 4chan “discovered it” and moved forward promoting it as the new cryptocurrency to acquire.

So $ocDAI just did a 5x today and it’s not because @compoundfinance is getting hacked..

Want to make money off 4chan? 🤫

Indeed, small-capitalization digital assets were great to perform these kinds of manipulation. Considering these virtual currencies don’t have liquidity and are traded in shady exchanges, the possibilities of creating pump and dumps grow. Nonetheless, these practices are condemned by the crypto space and by the entire community of traders and exchanges in the world.