The crypto market was in a sea of red on Friday as bitcoin, the world’s largest cryptocurrency by market capitalization, tumbled more than 10% over the past 24 hours.

It appears that global investors have entered the year with a reduced appetite for risk, and so the correlations between speculative assets such as cryptocurrencies and equities have increased, which results in widespread losses. Bitcoin is down roughly 40% from its all-time high of almost $69,000, while the S&P 500 is down about 7% from its peak, compared with a 10% drawdown in the Nasdaq 100 Index.

Alternative cryptocurrencies (altcoins) led the way lower on Friday given their higher risk profile relative to bitcoin. Ether, the world’s second-largest cryptocurrency by market cap, was down about 13% over the past 24 hours, compared with a 14% drop in AVAX and a 16% drop in FTM over the same period.

Despite the losses, some analysts still foresee a short-term bounce. “We expect BTC to find a bid around the $35K mark, close to 50% from the top. In the short term, we can bounce to challenge the $45K-$50K zone, but the overall outlook remains bearish as liquidity remains tight,” Pankaj Balani, CEO of Delta Exchange, a crypto derivatives trading platform, wrote in an email to CoinDesk.

For now, technical indicators show nearby support at about $37,000 for bitcoin, although stronger support at $30,000 could stabilize a deeper correction.

“Many altcoins are into support at their summertime 2021 lows, making it critical that bitcoin holds support as it sets the tone for the cryptocurrency space,” Katie Stockton, managing director of Fairlead Strategies, a technical research firm, wrote in a Friday briefing. Stockton assigns a 30%-70% probability of a continued breakdown below current BTC price levels.

According to data from CoinGecko, the total market cap of the cryptocurrency industry has fallen 11% to $1.9 trillion as of Friday afternoon U.S. time from an all-time high of $3.1 trillion in November.

The drop in total market cap has exposed many crypto traders to significant risk. According to Coinglass, there has been nearly $600 million in liquidations during the last 12 hours. Bitcoin led the liquidation pack at $250 million, followed by ether at $163 million and SOL at $10.9 million.

According to OKLink, the liquidation volume on decentralized finance (DeFi) tokens reached $34.3 million on Friday, the highest since December.

Liquidations in the crypto market happen when a trader has insufficient funds to fund a margin call – or a call for extra collateral demanded by the exchange to keep the trading position funded. They are especially common in futures trading. 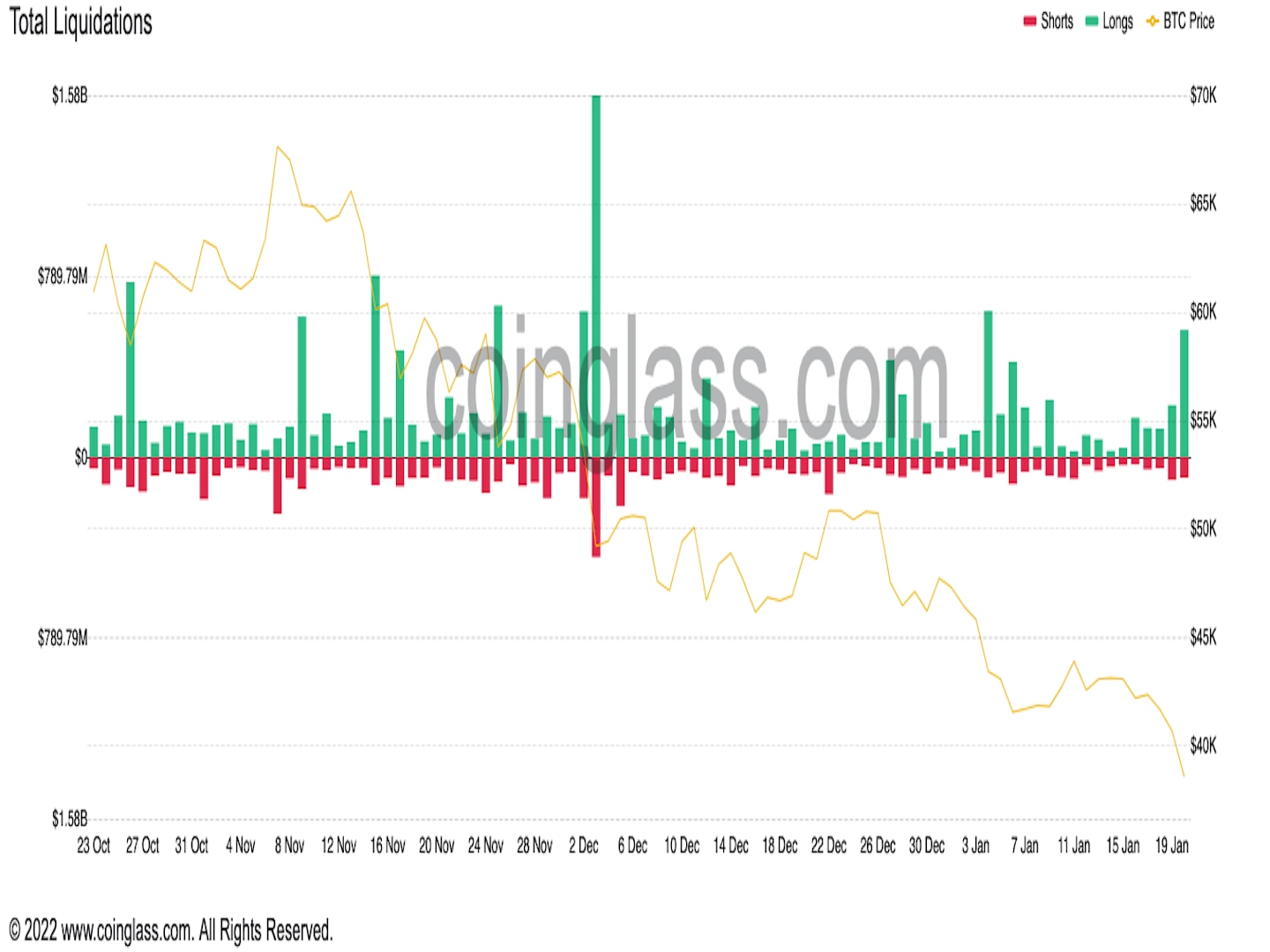 Bitcoin is roughly 40% below its all-time high of $69,000, which is a significant drawdown. The previous drawdown extreme was in July when BTC settled near $28,000 after falling roughly 50% from its peak. BTC is vulnerable to extreme losses, similar to what occurred in 2018 when the decline reached 80%.

Bitcoin’s peak-to-trough declines have been less severe over the past year, especially given the long-term uptrend in price and the decline in volatility.

The chart below, created using Koyfin, a financial data provider, shows bitcoin’s historical drawdown and the cryptocurrency’s 90-day correlation with the S&P 500 in the second panel.

Most digital assets in the CoinDesk 20 ended the day lower.

There were no gainers in the CoinDesk 20 on Friday.

SEC Objects to MicroStrategy’s Accounting Adjustment for Its Bitcoin Holdings