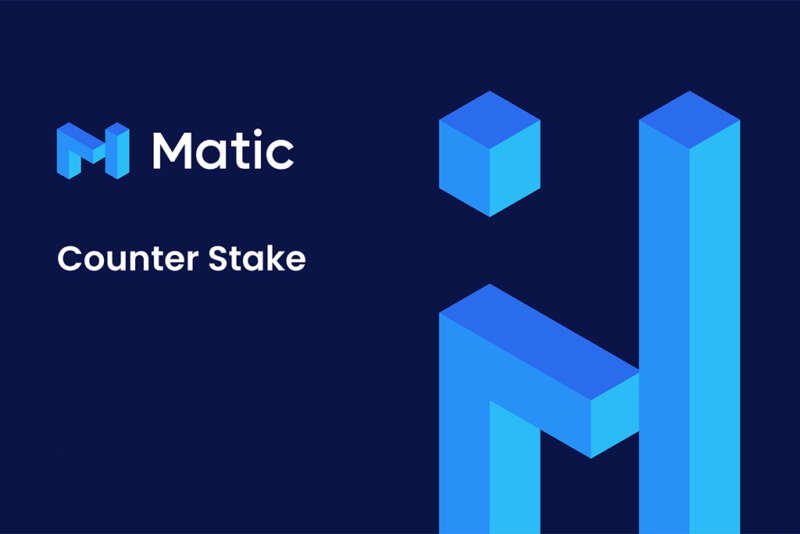 Matic Network – the Plasma-based layer-two scaling solution for Ethereum – has announced the live testnet of its public incentivized staking network, Counter Stake. Detailed in the latest project update by the Matic team, Counter Stake will encompass several stages, beginning with stage 0 (node setup stage), which is now available to the public.

“We have therefore released a detailed step-by-step guide to assist you to install dependencies and set up your node, along with information in the proceeding stages,” detailed the formal announcement. “There are more than 3 million mainnet MATIC tokens to be shared amongst the winners and participants of Stages 1 and 2.”

Stages 1 and 2, which will entail the gradual release of staking contract details and a competitive staking contest, respectively, are expected to be rolled out in 2020.

As part of their broader staking endeavours, Matic also recently announced the launch of their pre-staking initiative with Korean exchange Coinone, providing an interest rate of 30.29% APR. Coinone is the first of many top-tier exchanges that will support pre-staking of MATIC tokens.

The announcements follow an eventful month for Matic Network, which has recently welcomed several more crypto ventures into their growing ecosystem who are now building on Matic’s infrastructure, including Battle Racers and Zawadi.

Ethereum’s recent successful implementation of its Istanbul hard fork sheds light on the progress made in the underlying technology and direction of the smart contracts platform in the last few years. Istanbul consists of six EIP improvements for the network and optimizations for zero-knowledge proof technologies, like SNARKs and STARKs.

Istanbul is Ethereum’s 8th hard fork and sets the table for the next upgrade in the roadmap to Serenity (ETH 2.0), named Ethereum 1.X. Many of the scheduled upgrades towards Ethereum’s PoS sharded public blockchain, have been undergoing research and development for years. The considerable task to translate Ethereum’s PoW consensus to PoS will hit a pivotal moment once Serenity Phase 0 goes live, which is set to include the rollout of the Beacon Chain – signaling the official transition to PoS.

Many of the goals for PoS, Plasma, and layer two scaling solutions (i.e. sidechains) appear to be materializing from their modest origins. Outside of Ethereum, platforms like Cosmos, Tezos, and the looming Polkadot are helping to pioneer some cutting-edge developments in the technology underscoring blockchains.

Gavin Wood has dubbed the rising narrative as the “Blockchain Wars,” where a diverse ecosystem of PoS, interoperable blockchain networks are competing head-to-head for users and capital.

However, Ethereum still maintains a significant edge over its competitors with its outsized network effects that have attracted a dedicated and flourishing development community. And smaller projects like Matic have been working on scalable technologies for Ethereum since 2018.

Parallel to the developments of Ethereum are ancillary projects, like Matic, focusing on flexible sidechain technology. Ethereum’s upgrade to PoS, despite improving scalability, does not make many of its layer two projects obsolete. And small teams like Matic have been toiling away at scalability solutions that apply to areas such as DeFi and gaming.

Plasma-based PoS sidechains have been the primary focus of Matic.

Plasma, a complex technology designed to vastly increase the processing capacity of blockchains, is paired with PoS sidechains in Matic that are tethered to Ethereum’s main chain. As a result, dApps using Matic sidechains can operate with reduced transaction fees and faster processing, whilst retaining settlement finality on Ethereum’s root chain.

Dapps that are looking to attract users require UX akin to conventional applications, meaning that smoothing the interface to reduce lag and transaction costs is a necessity. Matic is explicitly designed to give such applications a boost, and many projects are taking notice.

For example, Matic has recently partnered with blockchain-oriented gaming projects Battle Racers (housed in Decentraland – another project for which Matic is providing scaling infrastructure) and Blockade Games. ChainGuardians, an NFT-oriented game, even hosted an NFT sale on Matic Network for their limited edition ‘Mudra’ NFT.

Matic also partnered with TROY at the end of November, an upcoming Binance Launchpad project, to devote R&D resources for layer two networks. TROY is a global prime broker for crypto asset trading and management, which is looking to utilize layer two solutions to cater to the high-performance demands of financial institutions.

Counter Stake is the flagship move for Matic in recent months and is set amid an increasingly competitive landscape for staking and scalability. In line with the developments of many other Ethereum projects gaining momentum, the official launch of scalable layer two solutions could end up becoming the spark the ignites mainstream interest in more user-friendly blockchain dApps in the run-up to Ethereum’s Serenity.

With 2020 just over the horizon, the accelerating pace of blockchain solutions appears poised to hit yet another gear. Matic’s public Counter Stake network is indicative of tangible progress made in the underlying technology of Plasma and PoS sidechains, marking a moment many users and developers have been eagerly waiting for.

Having obtained a diploma in Intercultural Communication, Julia continued her studies taking a Master’s degree in Economics and Management. Becoming captured by innovative technologies, Julia turned passionate about exploring emerging techs believing in their ability to transform all spheres of our life.

XRP Now Listed On CEX.IO For Customers in the United States